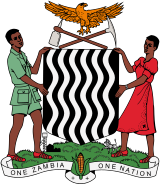 NL extends US$3.3 million funding for solar power in Zambia

We are proud to announce that the Netherlands is bringing access to energy in Zambia one step through supporting a ground breaking solar tender in Zambia. Working with the Zambian Power Company, the Neoen and First Solar consortium will construct a new 47.5MWac facility, that will help the country cope with droughts and electricity access deficits. The consortium has set a new benchmark for solar tariffs in the Sub-Saharan Africa with tariffs as low as US$0.06cents/kWh, in a region where the average cost of energy is USD$0.13 cents. This truly will make access to energy a reality for many people.

The renewable project comes in at a time when Zambia, characterized by high dependence on hydropower, is experiencing lower than expected rain- fall leading to acute energy shortages and load-shedding of up to 10 hours a day. This is a severe barrier to the country’s economic development.

The Scaling Solar project is a World Bank Group initiative. It makes it easier for Governments to quickly procure and develop large scale solar projects with private financing. 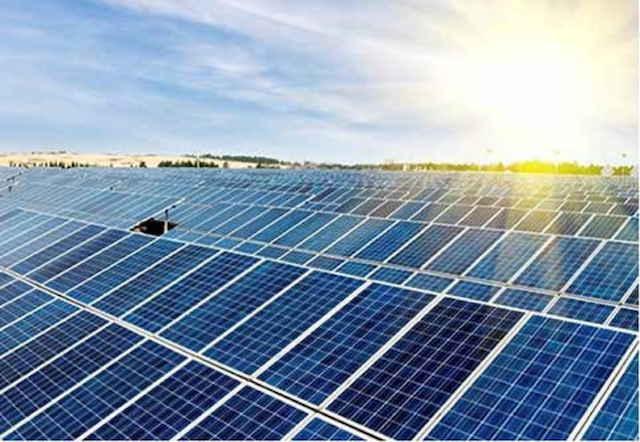 On 6 October 2017, the Minister of Health declared an outbreak of cholera in the Zambian capital, Lusaka. From 28 September through 7 December 2017, 547 cases including 15 deaths (case fatality rate = 1.8%), have been reported since the beginning of the outbreak. The initial outbreak period was from 28 September through 20 October. From 21 October through 4 November 2017 there were less than five cases reported each week. However, from 5 November 2017 an increase in the number of cases was observed with a total of 136 cases reported in the week beginning 26 November. 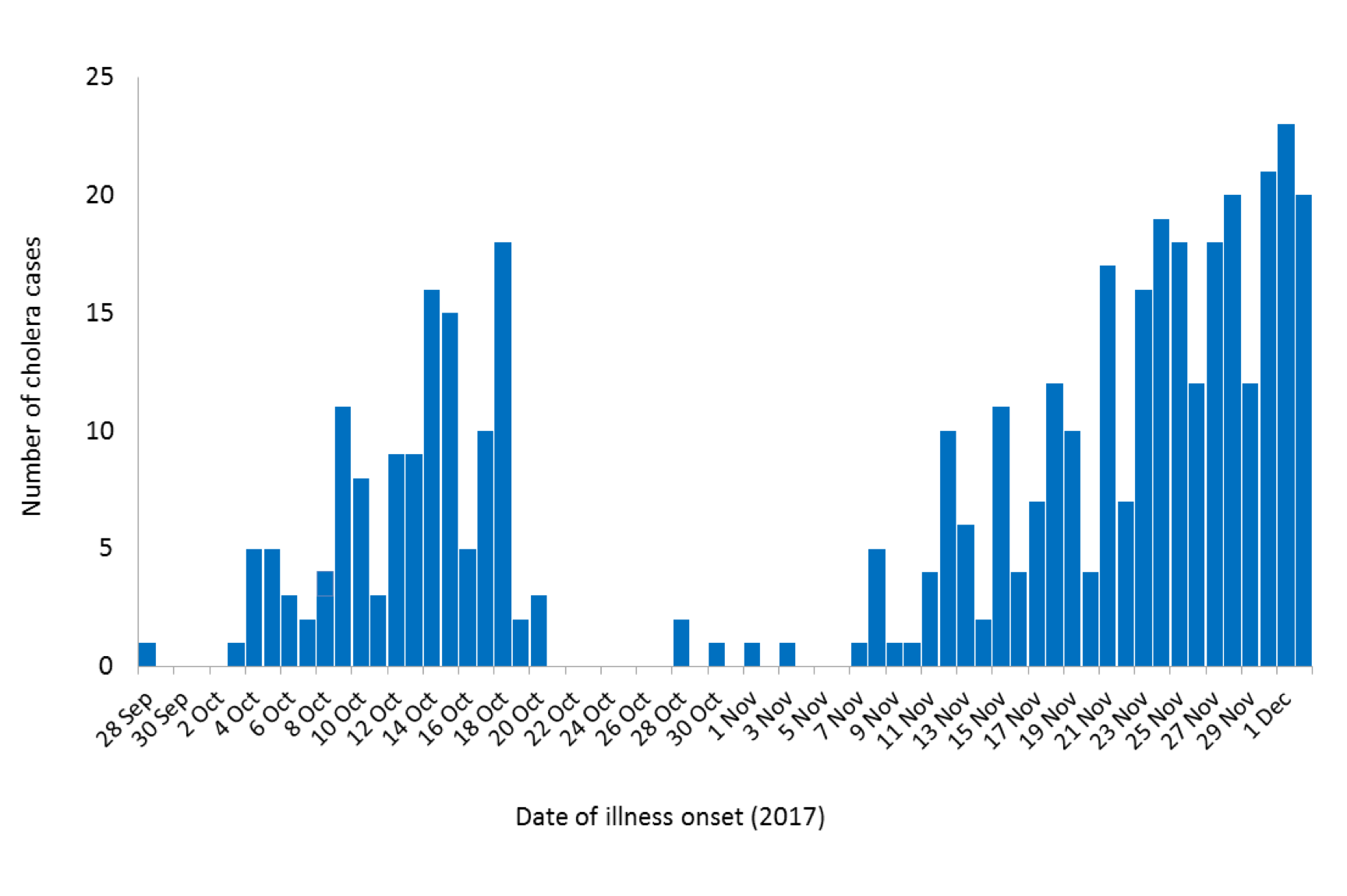 Figure 1: Number of cholera cases in Zambia reported by date of illness onset from 28 September to 2 December 2017

The cholera outbreak initially started in the Chipata sub-district and spread to Kanyama sub-district around 9 October 2017. The outbreak has spread from the peri-urban townships on the Western side of Lusaka City to the Eastern Side with a new case reported in Chelstone sub-district. As of 7 December, the affected sub-districts include Chipata, Kanyama, Chawama, Matero, Chilenje and Chelston. Sixty-two cases are currently receiving treatment in Cholera Treatment Centres in Chipata, Kanyama, Matero and Bauleni. One third of the cases are children under five years old and two thirds are persons five years and older.

A total of 282 Rapid Diagnostic Tests were performed, of which 230 were positive. Of 310 culture tests, 53 were positive for Vibrio cholerae O1 Ogawa (48 from Chipata, four from Kanyama and one from Bauleni). Water quality monitoring is ongoing in all sub-districts, with intensified activity in Kanyama, Matero and Chipata. The results so far show that nearly 42% of tested water sources are contaminated with either Faecal Coliforms or Escherichia coli.

The following public health measures are currently being implemented:

The current outbreak is occurring in Zambia’s largest city, Lusaka. The main affected sub-districts, Chipata and Kanyama, are densely populated and have an inadequate water and sanitation infrastructure, which may favour the spread of the disease. The sources of infection transmission in this outbreak have been associated with contaminated water supplies, contaminated food, inadequate sanitation and poor hygiene practices.

The coming of the rainy season, coupled with inadequate water supply and sanitation increases the risk of outbreaks in Lusaka and other parts of the country. Adequate supplies for cholera response should be obtained as part of preparedness activities.

Zambia hosts about 60 000 refugees (as of September 2017) from neighbouring countries. A large proportion of refugees are from the Democratic Republic of the Congo (DRC) and are mostly residing in Nchelenge refugee camp located more than 1000 km distant from Lusaka. The influx of refugees has led to overcrowded settlements with high needs for shelter, healthcare and WASH facilities. Most refugees are in poor health condition, especially children; therefore, risk of disease outbreaks is high. Sanitation is a challenge at hosting sites. Given the security situation in DRC, further influx of refugees is expected.

WHO recommends proper and timely case management in Cholera Treatment Centres. Improving access to potable water and sanitation infrastructure, and improved hygiene and food safety practices in affected communities, are the most effective means of controlling cholera. Use of oral cholera vaccine may also be used for outbreak control. Key public health communication messages should be provided.

WHO advises against any restriction to travel to and trade with Zambia based on the information available on the current outbreak.

For more information on cholera, please see the link below:

Below is a news item from the ReliefWeb news website:
https:// .int/report/zambia/who-supports-immunization-1-million-people-against-cholera-zambia

The Government of Zambia has launched a campaign on Wednesday (January 10) to vaccinate residents of Lusaka against cholera with support from the World Health Organization and partners.

Two million doses of the oral cholera vaccine from the Gavi-funded global stockpile were delivered to the southern African country in January, enough to immunize 1 million people. 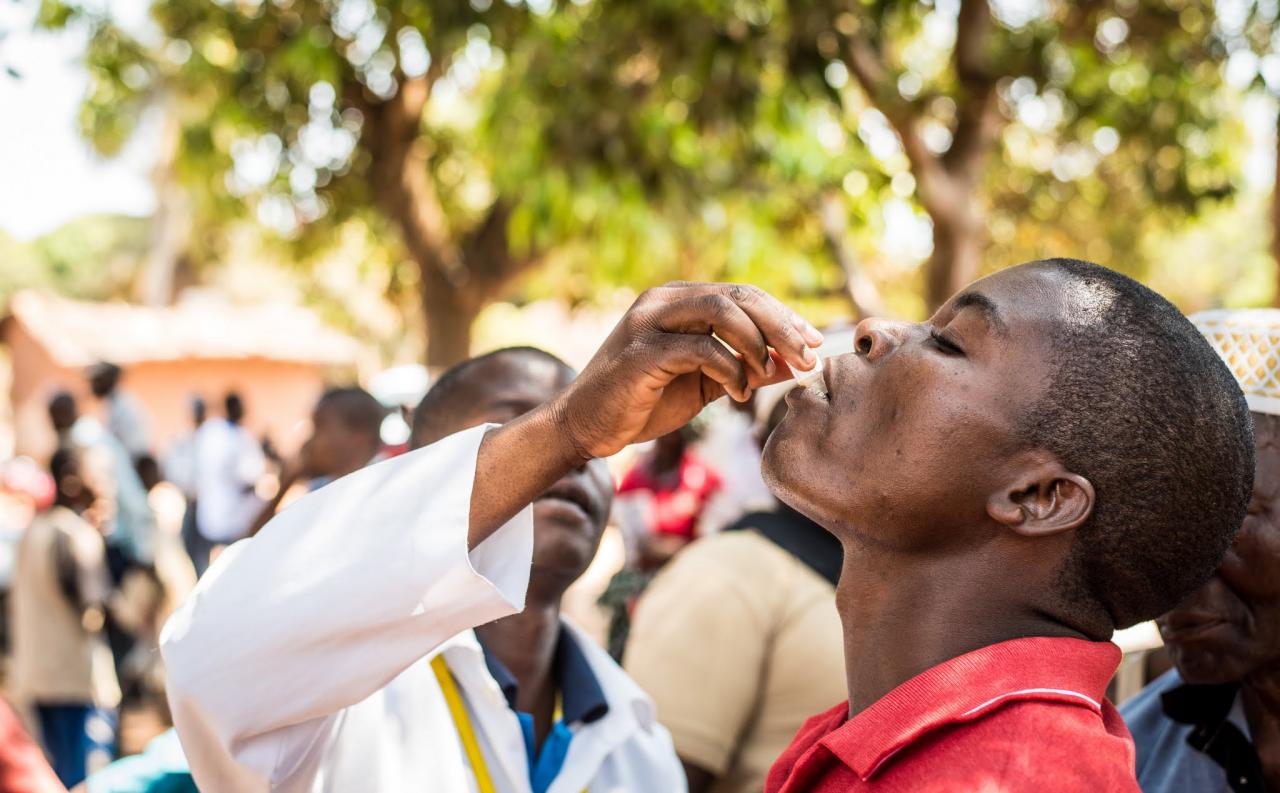 According to Health Minister Dr Chitalu Chilufya, the campaign will bring the life-saving oral cholera vaccine to the people who need it most. He also highlighted the role that communities can play in preventing the spread of the disease. “Communities should not ignore basic preventative measures because the key drivers of this epidemic include consumption of contaminated water and food, poor waste management, and poor personal hygiene practices which have to change,” said Dr Chilufya.

Cholera is an acute diarrhoeal disease that can kill within hours if left untreated. Since the start of the current outbreak on 4 October 2017, the Ministry of Health reports that there have been a total of 2,672 cases, with Lusaka alone accounting for 2,558 cases. There have been 63 deaths countrywide, 58 of which in Lusaka.

WHO is working with the Zambia National Public Health Institute (ZNPHI) to address the underlying causes of the cholera outbreak: clean water provision, sanitation and health education on personal hygiene. WHO is also helping authorities to track down cases, treat cholera patients and provide community health education.

Selected vaccination sites in central areas of Lusaka will be targeted under the campaign. WHO has provided training to medical personnel in how to administer the vaccine, as well as on other preventive measures and cholera treatment.

“Zambia is experiencing one of the worst outbreaks of cholera in years,” said Dr. Nathan Bakyaita, WHO Representative to Zambia. “With this campaign, we can stop cholera in its tracks and prevent an even more devastating epidemic.”

While sporadic cases of cholera are regular occurrences in Zambia during the five-month rainy season, the number of cases this year has exceeded the average annual caseload.

WHO recommends that vaccination against cholera be considered in emergencies and other high-risk scenarios where there are increased threats of outbreaks, when combined with standard prevention and control measures for the disease. These measures include readiness to provide adequate testing and treatment, steps to ensure access to safe water and sanitation, and community mobilization to engage the public in preventing infection.

Planning is underway to vaccinate a further 1 million people living in known cholera hotspots across the country later this year.

The outbreak of the acute diarrhoeal disease has infected around 2,000 people in the past three months, killing more than fifty patients.

Lack of sanitation is causing a cholera crisis in Zambia where the government has taken extraordinary measures, such as banning street vendors and public gatherings, in the capital Lusaka to wipe out the disease. 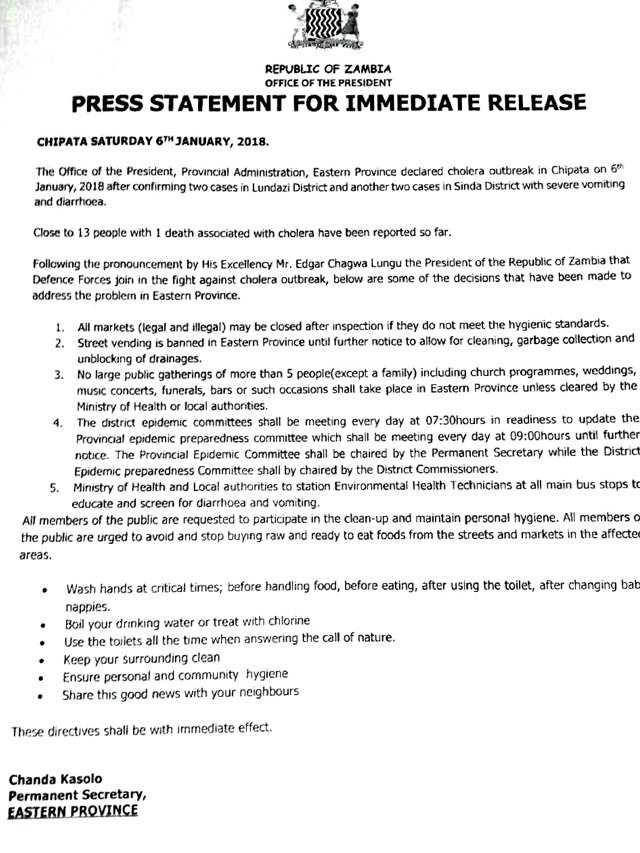